Try 5-Out in just 5 minutes.
See how predictive analytics can improve your bottom line. Get started in less than 5 minutes.
Thank you! Your submission has been received!
Oops! Please try again.
Close

5-Out Helps Tono Pizzeria + Cheesesteaks Scale and Benchmark their Success

With easy-to-follow data presented in a pleasing visual format, 5-Out is helping a Minnesota restaurant group to scale and benchmark their growing success. 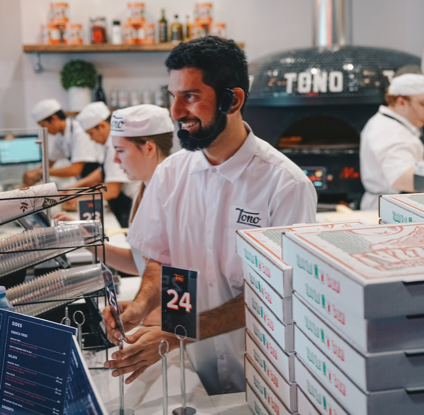 Shaz Khan is the owner and co-founder of a fast-growing hospitality group based in Minnesota. With six sites across two brands (Franke & Andrea and Tono Pizzeria and Cheesesteaks) Shaz and his team are actively looking at expansion opportunities.

Unusually for a restaurateur, Shaz is a qualified electrical engineer. Data analysis is at the heart of his business strategy, and when it comes to choosing tech partners, his standards are high.

“I try to seek out companies where someone on the executive team – it doesn’t have to be the founder or CEO - but someone of authority on the technical side is willing to hear me out, because, to me, that indicates three things: that they care, that they see value in my feedback as a customer, and that they are committed to improving their product, rather than just being on a sales rampage as some companies may be,” he comments.

This focus has resulted in Shaz being appointed to the Customer Advisory Board of Toast, the leading POS restaurant management system.

When evaluating 5-Out, Shaz says: “I looked into the product and talked to the guys at 5-Out for quite a few hours. I’m very particular about what questions I’m asking before saying ‘yes’ because I need a full understanding and the guys were very accommodating.”

Crucially, Shaz included his operations managers in the evaluation process (watching demos, Q&As, trialling the product) right from the start. “Just because I like something doesn’t mean they will, and vice versa, so having them present during the evaluation phase is very important,” he says.

The verdict? Shaz says: “Oh, they love 5-Out. During our progress meetings now I don’t ask ‘How’s it going?’ because that’s too open-ended. My question is: ‘Should we keep it or drop it?’ and every time the answer is: ‘Keep it.’”

Shaz highlights three key features of the 5-Out platform that he and his team appreciate: First, for multi-site businesses, the 5-Out platform presents the historical data and forecasts for each individual restaurant all in one place, making benchmarking and comparisons quick and easy.

“As we continue to scale and grow more stores and therefore more staff, the comparative analysis of the performance of all of those stores and the forecasting of all of those stores becomes paramount because we want to understand on a high level how each store compares to each other and what the differences are. The 5-Out platform provides that visibility all in one place,” says Shaz.

Second, the easy-to-follow visual presentation: “Sometimes you have numbers in front of you and your brain still has to prepare an analysis. Instead, seeing a graph, the brain loves to see lines that are higher and lower or the trend line, it’s just so much easier to interpret,” he explains.

Thirdly, the 5-Out platform enables operators to isolate one particular variable, for example labor percentages, and quickly make comparisons from restaurant to restaurant.

Because 5-Out not only integrates with the restaurant's tech stack (POS, labor, reservations, events) but also ingests data from external sources such as the weather, operators can also look at external variables, for example, to see how a rainy day impacted different outlets in the same vicinity.

The ops team look at the 5-Out sales forecasts twice a day within the restaurants, and in order to run weekly and monthly reports.

“We’re looking at maintaining a labor cost of around 25% of gross sales. That’s an important metric for our business model which is counter service QSR. Whatever factors are affecting sales up or down, we are responding appropriately on labor,” comments Shaz.

Having an effective tool to benchmark labor costs is even more important in the current inflationary environment when food, fuel and other prices keep rising, he adds: “There’s just less control over contracts and deals to keep prices fixed and as a result it’s even more necessary for the other half of our prime cost (labor) to be controllable.”

Putting future sales figures in the hands of an algorithm, inevitably raises a question of trust. Some restaurateurs might take pride in going with their gut feeling rather than relying on MachineLearning. Shaz is not one of them.

“I trust 5-Out’s forecasts because I have never had reason not to. It has never given me false data, something outlandish, or data that requires manual intervention.”

He adds: “The nice thing about having technology partners is that you get to understand your baseline and it becomes second nature. You just know on a Friday you’re going to do this number of checks or on a Wednesday you’re going to make this amount of dollars. You get a pulse on the business so you can operate without being blind. That’s where it’s at.”

Request a demo to see how 5-Out can support your restaurant!

Get our weekly email

5-Out is on a mission to maximize the profitability of every restaurant, using machine learning, artificial intelligence and predictive analysis to automate smarter, better decisions.

Thank you! Your submission has been received!
Oops! Something went wrong while submitting the form.
Copyright © 5-Out Solutions, Inc. | hello@5out.io